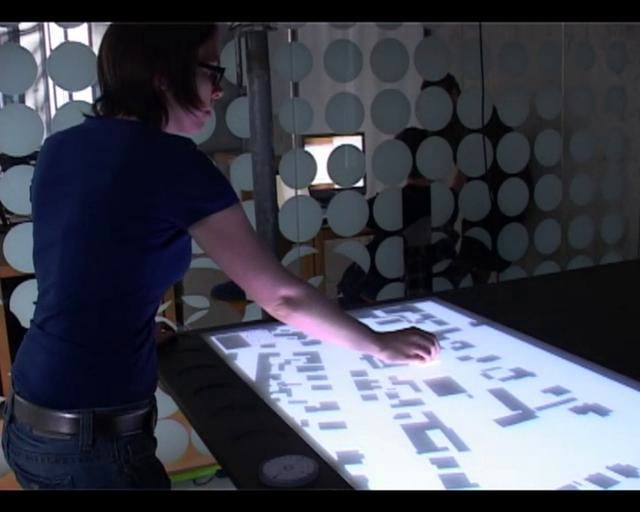 Urban development gets a Kinect kick and the results are just amazing! The Kinect Augmented Urban Model allows users to simulate urban time lines via a top mounted Kinect and an interactive table. This video by Katja Knecht displays this smart Kinect program and how engineers or urban developers can properly calculate some building dynamics (in this case, building shadow effects). In the video the user places blocks on top of the lighted table and the Kinect is able to detect these blocks and their depth. By putting an analog clock on the table and clocking it, the time frame of the urban setup changes and the blocks then conjure shadows based on on the time displayed. Developers then can calculate if their buildings will ruin the aesthetic value of other buildings. With these programs and Kinect hacks, urban development will surely reach a new phase of efficiency.

Here is a description of the project:

“In architecture and urban planning physical and digital models fulfil different tasks and functions within the design process and are not directly connected. This is due to their largely complementary characteristics and qualities. Whereas physical models are primarily used as a design tool and to represent and communicate a design, digital models also support the evaluation of a design by employing computer-aided analysis and simulation techniques.

Within the scope of my master thesis I analysed the use of the model as an analogue and digital design tool as well as its importance for the work process. In addition, I examined existing tangible user interfaces from the field of architecture and urban design. Based on early projects and approaches in this area such as the metaDESK by Ullmer and Ishii and the Urban Planning Tool Urp by Underkoffler and Ishii I developed a prototype application, the Augmented Urban Model.

The Augmented Urban Model aims to bridge the gap between physical and digital models and their usage in urban design and planning. The objective is furthermore to create a tangible user interface which facilitates interaction with and manipulation of digital data in real space. It combines the qualities of physical and digital models in the work process to facilitate the handling of digital applications and transfers digital data into a spatial context by augmenting the physical model with digital information.

The Augmented Urban Model was realised using current technologies, such as a back projection table and conventional consumer electronics (Microsoft Kinect), which enabled me to use and process non-predefined model elements. I implemented a simple shadow simulation to test the prototype. The application was developed in Visual Studio 2010 using csharp (C#).”

Interactive Data Module with the Kinect