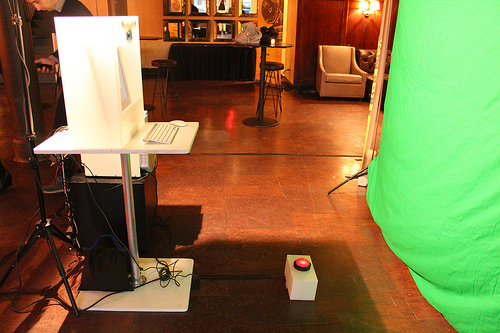 Nokia & Orange: A Kinect-powered ad for the Nokia Lumia 610

Subway, makers of some really awesome sandwiches, recently introduced a competition called Subway Fresh Artists to the students of NYU and USC. Subway challenged filmmakers to create a “scripted, episodic web series around the idea of ‘Every Breakfast Sandwich Tells A Story’ The contest received more than 50 entries and one of them just happened to use a Kinect to execute their concept.

According to the developer, the third episode in their series had demonstrations in it that were all generated ” using a software application I created in Processing that uses the Microsoft Kinect to measure distance between hands.” They then used the same technology to create a photo booth at the gala screening of their film for people to size up their own sandwiches.

Subway liked their entry so much that they were selected as one of the contest winners and their series premiered at the SXSW 2012. Congratulations to you guys! And be sure to show us what other applications you think for this project in the future!

You can check out more details at the project website using the link below.

ABOUT US
KinectHacks is dedicated to bringing you the latest in Kinect related software, hacks, gizmos and more. We've been bringing you the news regarding the Kinect since launch.
Contact us: info@kinecthacks.com
FOLLOW US
© KinectHacks.com - All Rights Reserved
MORE STORIES
Advertisement

Matt - July 2, 2011 0
The one-click-away-to-information is now replaced with any any-gesture-access-to-information! The Kinect Information Kiosk with QwikTouchPro is another step further in developing a gesture-based information and...