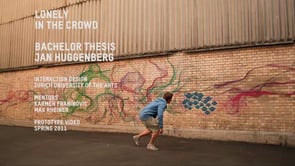 Have a visual of your interactions with strangers and acquaintances! The Kinect Lonely in the Crowd is an artistic representation of human physical distance and interaction. This video by Jan Huggenberg displays how the Kinect can produce a alluring views of various user interactions. In the video, users are represented by a swarm of cartoon bats projected at a wall. The bats follow the user and change their size and flight based on the user’s stance and from the wall. Another user can enter the scene and be represented by his/her own swarm of cartoon bats. When user’s touch each other and close the distance, the bats change color and collide with each other to produce shapes and patterns. Another artistic program making use of the Kinect and human interactions delivered perfectly and beautifully.

“Lonely in the crowd”  is a project about how to boost communication between strangers in urban space. It deals with the anonymity of citizens in the increasingly urbanized world we all live in. The result is an interactive installation that takes part in crowded, urban areas and makes it easier for strangers to get in contact with each other in a playful way.

On the one hand the installation motivates the passers-by to interact with it and most importantly with other people around them, on the other hand side it creates permanent patterns that visualize the different interactions that were made with others. In the course of time the wall becomes a piece of mural art showing the amount of personal connections that were made using the installation.”

For more information about the Kinect Lonely in the Crowd, visit the project’s website.

ABOUT US
KinectHacks is dedicated to bringing you the latest in Kinect related software, hacks, gizmos and more. We've been bringing you the news regarding the Kinect since launch.
Contact us: info@kinecthacks.com
FOLLOW US
© KinectHacks.com - All Rights Reserved
MORE STORIES
Uncategorized

John M. - August 14, 2012 0
There is  no denying that the Kinect is a revolutionary device. Even as I typed that, I realized that I was preaching to the...